Skip to content
Home › Juicers › Juicing Info › What Are the Benefits of Drinking Beet Juice? 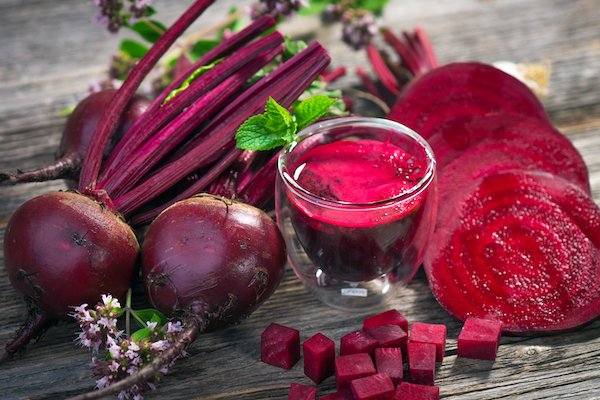 The beetroot, commonly called the beet, is a root vegetable packed with antioxidants and nitrates. Most people either love beets or hate them, but the evidence shows there are benefits of drinking beet juice.

Beets can be eaten raw, or you can make beet juice at home using a juicer or beet powder, or buy bottled juice. 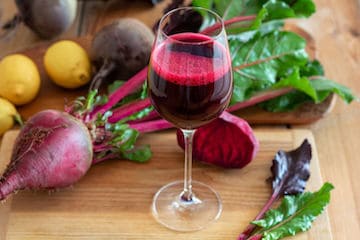 Among the benefits of drinking beet juice are its vitamins and minerals such as folate (vitamin B9), Vitamins A, C, and K, potassium, manganese. It also contains fiber, the phytonutrient called betalains (accounting for the deep red color), and nitrates.

According to the USDA, one cup of raw beets contains:

Beets have a glycemic index (determines the effect of carbohydrates on blood glucose levels) of 64, which is considered moderately high. However, it has a low glycemic load (5) since few carbs are in a one-half cup serving of beets.

It would take around 8 cups of beets or beets eaten along with many other foods containing carbohydrates to impact glucose levels.

Beetroot is a natural source of nitrates which are turned into a useful chemical, nitric oxide. This process begins when nitrate is mixed with saliva and bacteria it is converted to nitrite. As nitrite is swallowed and absorbed, it is reduced further to nitric oxide.

Nitric oxide plays a role in regulating blood pressure, blood flow,  and distributed blood flow throughout the body. For example, it controls blood flow in organs such as the brain and heart.

Beetroot supplementation has been reported to reduce systolic and diastolic blood pressure.

This is due to the nitrate in beets and their subsequent conversion to nitric oxide by your digestive system. Nitric acid can relax and widen blood vessels, which lowers blood pressure.

In 2018, researchers reviewed 11 studies (2008-2018) that sought to determine a relationship between beetroot juice consumption and blood pressure.

They recommended further studies to determine various factors related to BJR intake. Further, they stated BJR should be one component of a healthy lifestyle.

Although research into the effect of beetroot juice/supplementation on blood pressure has increased in the last decade, there is insufficient data to conclusively state beet juice can lower your blood pressure or prevent it from rising.

As with all dietary and supplementation, please consult your healthcare provider.

A nutritional benefit of drinking beetroot juice is the conversion of its naturally occurring nitrates into nitric oxide.

When consuming nitrate-rich food, the nitrates in the saliva react with bacteria that contain an enzyme, nitrate reductase. Upon reaction, the nitrate converts to nitrite. As the nitrite is swallowed and absorbed, it is reduced to nitric oxide.

Nitric oxide helps blood vessels relax, causing them to widen. This improves blood flow and increases the amount of oxygen in the bloodstream.

The theory is you will have more power and can move more efficiently.

However, consuming beetroot juice probably makes more of a difference in the performance of professional athletes than amateur athletes. The results also depend upon the nitrate levels in the beetroot juice and food intake and supplementation by the athlete.

Even if you aren’t an Olympic-caliber athlete, incorporating beet juice into your eating plan is still a good idea. It has antioxidant and anti-inflammatory properties.

If you are a runner or do high-intensity workouts, you may benefit from the improved oxygen flow.

Research has been conducted to determine a correlation between nitric oxide levels and athletic performance in the past two decades.

A few studies have shown dietary nitrate can lower the oxygen cost of exercise and enhance performance in endurance sports. Oxygen cost is the amount of oxygen the body takes up and uses during an activity.

If the oxygen cost is reduced, an athlete might be able to exercise longer before being exhausted, or the time to run 10 miles, for example, might be reduced.

A 2011 study by Jones et al. looked at the effect of nitrate supplementation on cycling performance. The participants were nine men who were competitive cyclists.

The length of the endurance tests was 2.5 miles or 10 miles. The results showed that the men who drank beetroot juice improved the 2.5 miles performance by 2.8% and the 10-mile performance by 2.7% compared to those whose drink did not contain nitrates.

However, during the last 1.1 miles of the run, running velocity was 5 percent faster in the beetroot trial. No differences in exercise heart rate were observed between trials, but a rating of perceived exertion (how hard you feel like your body is working) was lower with beetroot.

There is much more research to be conducted to conclude whether dietary nitrate supplementation can improve athletic stamina.

There are several factors, such as gender, age, health status (diabetic, COPD), fitness level (low vs. high), smoker vs. non-smoker, type of exercise activity, intensity, and time, and the type, amount, and duration of supplementation to consider.

In addition to nitrates and vitamins and minerals, another benefit to drinking beet juice is its antioxidant properties. Antioxidants are substances that may prevent cell and tissue damage caused by high levels of free radicals in the human body.

A free radical is an atom or group of atoms with at least one unpaired electron. The radicals like to steal electrons from other molecules. When a substance loses an electron, the structure and function can be changed.

Oxidative stress leads to oxidative damage to the cell. This damage is linked with several chronic diseases, including diabetes, hypertension, and cardiovascular diseases.

Beetroot juice is a source of betalains which are water-soluble, nitrogen-containing pigments. The antioxidant activity of betalains is well documented. For example, betalains scavenge free radicals (they donate an electron to a free radical that either neutralizes it or lessens its capacity to damage). This leads to less oxidative stress on the cell and, in turn, reduces oxidative damage.

According to this study, beetroot juice might be one way to strengthen antioxidant defenses inside our body, helping protect the cell structure and molecules from oxidative damage.

A side effect some people experience after drinking beet juice is their urine turns reddish/pink. This is not a cause of concern unless you feel sick or the coloring remains. In this case, contact your health care provider for advice.

Oxalates are naturally occurring substances found in certain foods, such as beets. They usually leave the body in the urine.

If your body has too many oxalates, they can combine with calcium and form a salt. If our body doesn’t process this calcium oxalate compound, they form crystals. These crystals can turn into kidney stones.

However, for most people who enjoy beets as part of a balanced diet and drink at least six glasses of water a day, oxalates aren’t an issue.

If you have kidney disease, have had kidney stones, or are on a low-oxalate diet, please consult with your medical provider before adding oxalate-rich foods to your eating plan.

Adding beets to your diet

There are recipes for pickling, roasting, boiling, baking, and even frying fresh beets.

If you have a juicer, making beetroot juice is one way to add beets to your diet. A centrifugal juicer such as the Breville 800JEXL Juice Fountain Elite is a good choice if you plan to make beet juice. If you aren't sure what type of juicer to use, our article on choosing the right juicer might be helpful.

To prevent beets from staining your hands and clothes, you might consider wearing gloves and an apron or an old tee-shirt.

After washing the beets (you might need a scrub brush to remove the dirt), we peel the outer layer of skin, cut in 4 or 6 pieces, chop the leaves into smaller pieces, and add them to the juicer with other ingredients.

Canned beets are the easiest way to add beets to your diet. Beets can be sliced and put in a salad used as a dip ingredient or sliced and dried in the oven to make beet chips.

When shopping for canned beets, some folks opt for those with no salt added. One benefit of beets is they have a small amount of fat and no cholesterol.

The beetroot has been used as a food and medicine for centuries, beginning in Ancient Roman time (8th century B.C - 5th century B.C). Hippocrates (460 B.C.–375 B.C.) is said to have promoted beet leaves for binding wounds.

In the third century A.D., some recipes included beetroot, also used to treat fevers and other ailments.

Beetroots were long and shaped like a turnip during the Middle Ages, instead of the round, hard, red balls we are familiar with today. The roots and leaves of beets were eaten and used for their medicinal value. For example, the juice from the leaves was used as a stool softener, and the root was burned and mixed with honey and used as a remedy for hair loss.

In 18th century England, beets were used as livestock feed. By the early 1800s, beets were growing in gardens in the United States. The first successful commercial production of beet sugar began in 1870 in California.

This post is for informational purposes only and is not intended as medical advice. Please consult your healthcare provider for recommendations related to your individual situation.