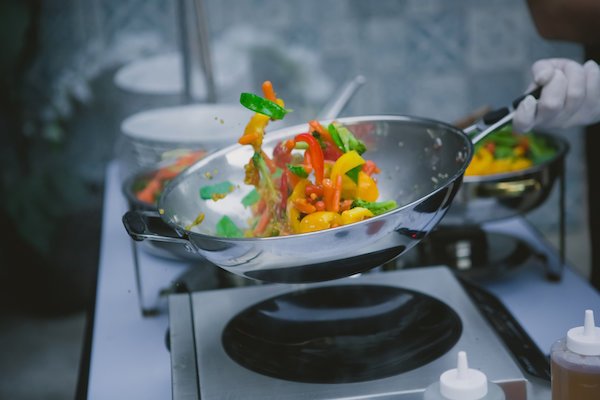 A wok is one of the most versatile cooking pans you can find. Woks are used for many different cooking techniques such as frying, stewing and steaming to mention a few. It’s no wonder this pan is a common favorite among many cooking enthusiasts.

While it can be used on different stovetops, some people are curious as to whether a wok will work on an induction cooktop. The short answer is yes, but bear in mind that not just any wok will do.

There are two ways to sucessfully use a wok on an induction cooktop. First, use a specialized wok induction burner. Second, use a flat-bottom wok on a standard induction hob. In both cases, the base of the wok has to be made of ferromagnetic material.

In this article we’ll explain all you need to know about the kind of wok to use and its benefits.

Benefits of a Wok

So why did we single out a wok as opposed to the traditional cooking pan? Aside from its versatility, using a wok comes with the following advantages:

Which Type of Wok Should You Use?

So which type of wok should you use on your induction stove? You want to use an induction compatible wok which is characterized by the following features.

The Wok Must Have a Flat Base

Most conventional woks feature concave bottoms. Unfortunately, this type of wok won’t work efficiently on an induction stove because heat can’t be distributed evenly throughout the wok. Rather, opt for one which features a flat base designed to make direct contact with the induction hob.

The Wok Must Be Made from Ferrous Material 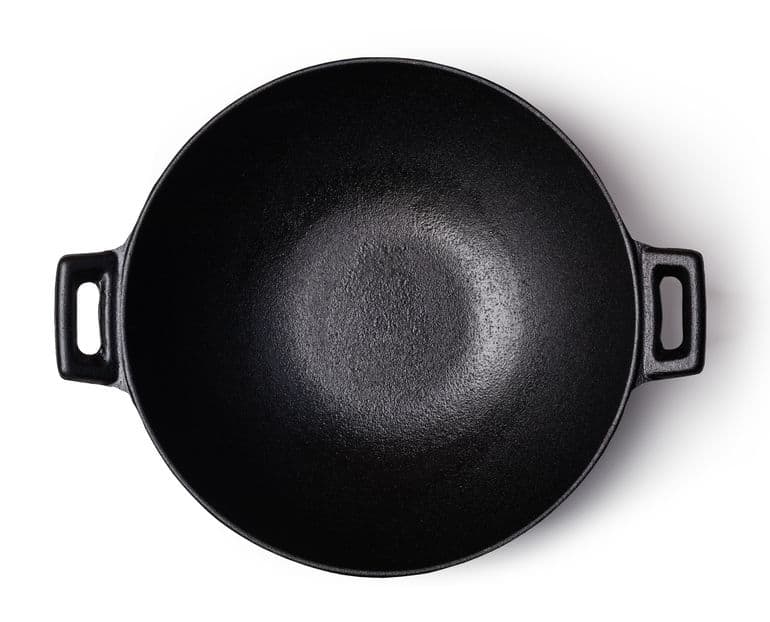 This is the most commonly used material in the construction of induction compatible woks. It’s perfect for induction cooking as it effectively conducts heat.

We’ll admit that it does take a while to heat up, but once it’s hot, cast iron is efficient at high temperature retention.

Woks made of cast iron are usually quite heavy. This is a good thing because the wok won’t be moving around your cooktop offering maximum stability. Just make sure that you use a well-designed spatula—or even two—if you pick a heavy cast iron wok.

You’ll appreciate how woks made of cast iron are not only durable, but they’re also the cheapest compared to other types of woks.

Woks made of carbon steel are equally as effective as their cast iron counterparts. The major difference is carbon steel woks aren’t as heavy as cast iron types. If you want a lightweight wok that’s easy to lift, this option is for you.

Because it’s not as heavy as cast iron, woks made of carbon steel generally heat up faster. If you want to reduce your cooking time opt for a carbon steel wok.

You’ll appreciate that a wok made of carbon steel is designed to last you a long time—provided that you maintain it properly.

Additionally, woks made of carbon steel are reasonably priced. 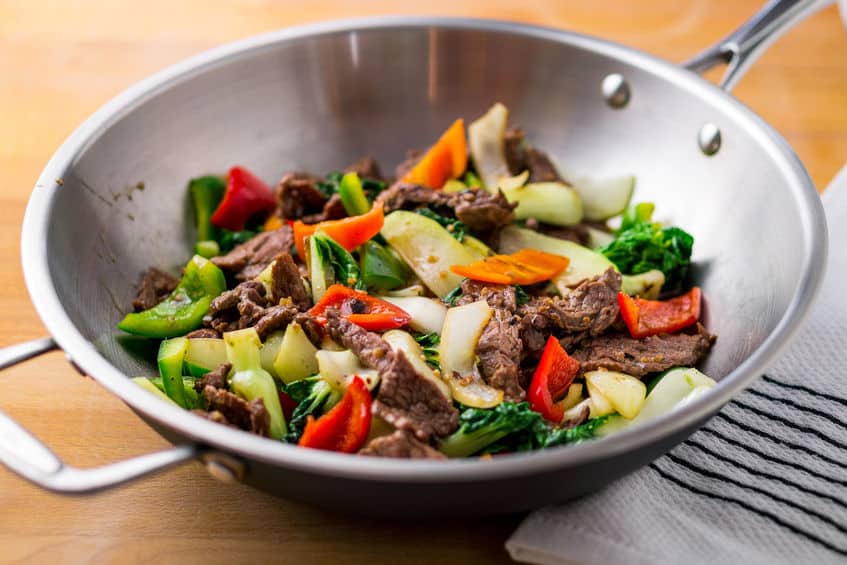 You also have the option of using a stainless steel wok on your induction cooktop. This material is much lighter than cast iron but its light weight doesn’t mean it’s any less effective.

Of the three wok types, stainless steel woks are the most expensive.

What is a pre-seasoned wok?

A pre-seasoned wok is coated with either wax or vegetable oil by the manufacturer. This is aimed at preventing rusting while it sits on the shelves in the warehouse.

Can I use a traditional wok on an induction stove?

Based on the above mentioned facts, it’s not recommended. But if you’re a professional chef you have the option to purchase an induction cooker that’s specifically designed for woks. This cooker features a curved surface. And the traditional wok which has a curved bottom will sit perfectly.

Note however that these are designed especially for commercial use. Plus, they’re on the expensive side.

How do I make sure the wok doesn’t scratch my induction cooktop?

No one wants their induction stove scratched by a wok. Thankfully this can easily be prevented by placing a thin silicone baking sheet on top of your cooktop hob. Thereafter you can go ahead and place your wok on top of the sheet.

Some cooks use kitchen paper, but the silicon sheet is more effective at protecting your induction cooktop. Plus, it makes for easy clean up; simply wipe with a damp cloth.

Can I use an induction wok without a lid?

Yes, you can. You’ll find different types of induction woks at your disposal. Some come with lids while others have internal racks. The latter comes in handy when you want to cook other foods separately to your stir-fry.

What is the best size for a wok?

Woks are available in different sizes and normally range from 12”-16”. The size you choose is entirely a matter of preference. But first consider the number of people you want to feed. Are you cooking for a small or large family?

Generally, the bigger the wok, the more food you can prepare on it. A standard-sized wok is between 12”- 14”. And this is large enough to cook food to feed a large family.

The only drawback to picking a large wok is that it’s often bulky which makes it difficult to store. That might not be the best option for you if you have limited cupboard space.