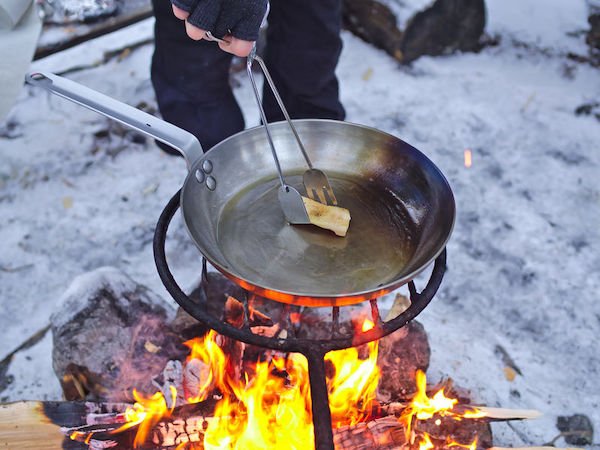 Carbon steel cookware has been used in professional kitchens for decades. They share a lot of the same cooking advantages of cast iron. However, carbon steel pans have a longer handle, weigh less, and are easier to maneuver. They also contain less iron than cast iron making them less brittle.

Carbon steel cookware can be used on induction cooktops as well as electric and gas ovens. This is convenient if you decide to switch over to induction cooking or if you use a portable induction cooker in addition to your conventional oven. As with cast iron, they can be used on the stovetop and grill and in the oven or broiler.

Carbon steel skillets are versatile because they can be used for a variety of cooking methods such as braising, searing, browning, sautéing, stir fry, and even baking. Carbon steel pans are great for searing steak, chicken and fish. They can also be used to make scrambled eggs and pancakes, roast vegetables, or prepare fried rice, salmon, deep dish pizza and even apple pie.

There are two contrary opinions regarding the use of carbon steel cookware (and cast iron) to prepare dishes containing highly acidic ingredients such as tomatoes or wine sauces. One perspective is that the acid damages the seasoning. This is problematic because if there is no barrier between the acid and the iron, the iron will leach into the food resulting in it tasting bitter and metallic.

Another viewpoint is that if the pan is well-seasoned and the food is not cooked for a prolonged period of time (less than 30 minutes), the seasoning will not be seriously degraded.

Carbon steel pans can last for more than one generation if they are properly used and maintained. This is in stark contrast to PTFE coated pots and pans which even with meticulous care generally won't last more than a few years.

Metal utensils can be used with carbon steel pans. For newly seasoned cookware, a light touch with the metal turner is recommended.

One advantage of using carbon steel cookware is that they are not coated with PTFE's,  such as Teflon(TM). Properly seasoned, they have a relatively non-stick surface which improves with regular use. Another benefit is that only a small amount of fat is required when preparing your food in a carbon steel pan. 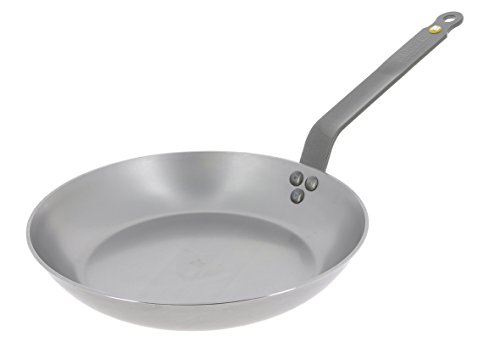 The composition and design of carbon steel pans is another reason to consider adding one to your cookware collection. They retain heat well and can safely withstand high temperatures. The sloped walls are great when sauteing and make it easier to flip foods such as pancakes or eggs.

The handle length and shape varies with the brand. Some cooks prefer a longer handle as the pan is easier to lift and maneuver and the handle remains a bit cooler than a pan with a shorter handle. However, the additional handle length adds weight (albeit not that much) to the skillet. Most carbon steel pans have a hole in the handle so they can be hung on a hanging pot rack. The angle of the handle of some pans is greater than others. 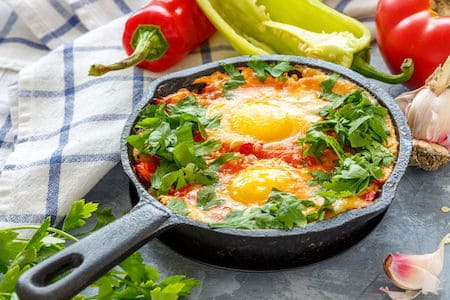 Carbon steel has around 1% carbon and 99% iron, while cast iron has 2-3% carbon, 1-3% silicon and the remainder iron. Since carbon steel has a bit less carbon than cast iron, it is less brittle.

Care has to be taken to ensure a rust free surface on carbon steel pans. On the other hand, stainless steel is rust free.

Once well-seasoned, the surface of carbon steel pans is non-stick. Stainless steel cookware, however, does not have a non-stick cooking surface.

Carbons steel frying pans are durable, versatile and non-stick if well-seasoned. They are thinner and lighter than cast iron, thus easier to lift and maneuver. However, the downside is they don't retain heat quite as well as cast iron skillets.

A carbon steel pan, if properly used and cared for, will last a lifetime and are a viable alternative to Teflon(R) coated pans.