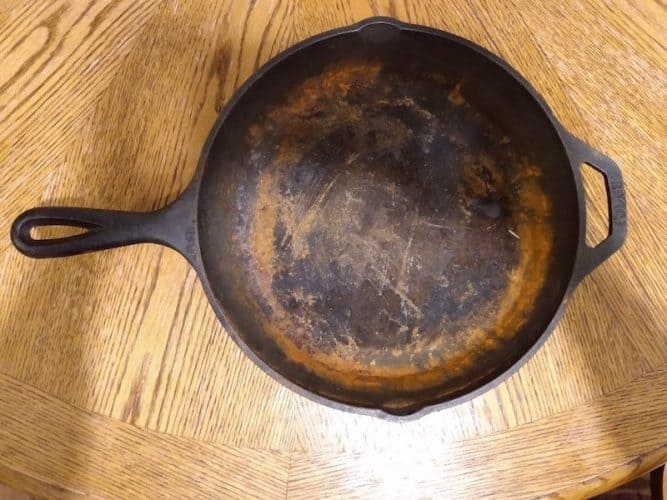 If your cast iron skillet has become rusty or you found a vintage iron skillet that has been neglected, you will want to know how to clean it.

Cast iron is susceptible to rust unless sealed with a protective layer of carbonized oil, which is called seasoning. However, even if you have seasoning on your cast iron skillet, it can rust if you leave it in water or a moist environment.

Using a skillet we found at a thrift store, we developed step-by-step instructions on cleaning and seasoning a cast iron pan that is rusty.

Cleaning a Cast Iron Pan that is Rusty

To start breaking down the rust on the pan, use baking soda and water. Place the baking soda mixture on the pan and rub with a scrubber (I used a Scotch-Brite™ pad). Once some of the rust has broken up, rinse the pan in running warm water. 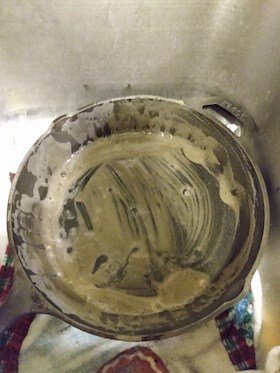 Now that you have gotten a bit of the rust off, it’s time to use a steel wool pad. Run warm water in the pan and scrub the pan’s inside, outside, and handle using something like Brillo or SOS.

Keep scrubbing until you get all of the rust off. This can take some time, depending on how rusty it is. Rinse the brown mush off in the sink.

To make sure your skillet is thoroughly cleaned, scrub it with a soft soapy sponge and warm soapy water. Rinse your skillet with warm water until all of the soap and debris are gone from the pan. 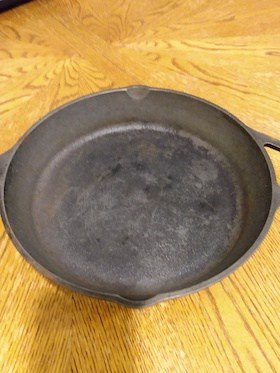 Put solid shortening on a clean, folded paper towel and coat the pan, inside and outside (including the handle). A thin layer of coating is best. Wipe excess shortening with a fresh paper towel. If you hold your pan at an angle, oil should not run or drip.

Step 6: Bake the Skillet in the Oven

Line a baking sheet with foil and place it on the lower rack of the oven to catch any excess oil that might drip. Place the cast iron skillet in the center of the top rack upside down in your pre-heated oven.

Let the skillet bake for one hour. After one hour or so, turn the oven off and leave the skillet to cool completely as the oven cools down. This extra time allows the seasoning to cure further.

Seasoning is important to smooth the surface and get the pan ready for cooking. Cooking foods with high-fat content, such as bacon or fried chicken, strengthens the seasoning.

Cleaning a seasoned cast-iron is easy – rinse it under hot water while the skillet is still a bit warm, and dry it right away. If there is caked-on debris, you can use a mixture of kosher salt (coarse) and water. We found two tablespoons of salt and enough water to make a paste. Scrub the pan with the paste using a stiff brush or sponge.

You do not want to leave it to air dry because the moisture can make it rust quickly. After it is dried with a towel, using a paper towel, coat it with a thin layer of vegetable or canola oil or solid shortening. Then dry it on the stove  (low heat) for a few minutes to get rid of excess moisture.

Cast iron pans should not be covered with a lid when storing because moisture in the air might become trapped, causing the skillet to rust.

Why Cook with Cast Iron?

A cast iron skillet is a great choice for deep frying chicken and okra, cooking a thick steak or bacon, making cornbread, pizza, Shepherd’s pie, chicken pot pie, or an apple pie. You can make pancakes with a round cast iron griddle at home or over a campfire. A review of this griddle from Lodge can be found here.