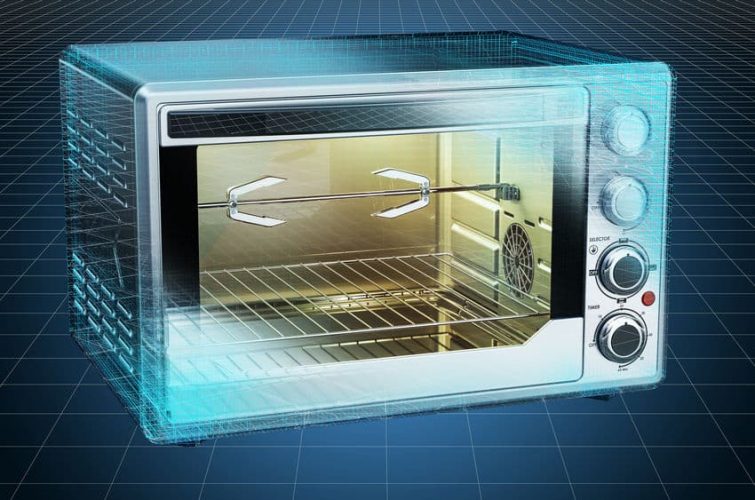 Convection fans have a massive impact on both cooking efficiency and recipe versatility. When buying a countertop oven, this is the most important feature you need to pay attention to.

Check out what separates the convection oven from the traditional toaster oven, why both are better than your regular bread toaster, and when exactly less is more. The information in this article will help you make the right decision for your kitchen and your budget.

Convection toaster ovens are supercharged, extremely efficient versions of non-convection toaster ovens. They use four principles to evenly heat food: radiant heat, warm air, a fan (or several), and conduction. Once the heating elements warm the air, it is then circulated around the inside of the oven with the help of the fan or fans.

The convection fan moves all the hot air around the food, which reduces the risk of hot spots forming. By doing so, it also rapidly increases the temperature inside the oven.

Improved air circulation has other benefits too. It reduces the moisture in the air, which makes it easier to get crispy skin on meat, or an even brown surface when roasting veggies. The food cooks faster too, as all sides get enough heat.

An easy way to tell whether a toaster oven has a convection feature is to check for a button labeled Convection, Conv, or Turbo. Additionally, a convection toaster oven is usually larger. The built-in fan may be visible on the side, but that’s not always the case.

Another cool thing about these toaster ovens is that they can accommodate more recipes. Convection toaster ovens may include functions such as air frying and slow cooking. Because of this, if you have a large enough convection oven, you might not need a regular built-in oven – not even to prepare your Thanksgiving turkey.

In almost every sense, convection toaster ovens are superior and they’re ideal to use for any cooking scenario. However, they require some getting used to. When using older family recipes, you may need to alter either the quantities of ingredients or the temperature and timer settings.

Convection toaster ovens reach the desired temperature faster than other toaster ovens do. The convection fans also ensure that the food is cooked from all sides evenly. Air circulation also eliminates moisture, which is usually useful, but you may find yourself with an overly crisp crust and a mushy pie interior. In short, these appliances are powerful, but you need to be willing to experiment with your recipes.

Non-convection, or conventional toaster ovens only use the radiant heat coming off the heating elements and interior walls. Warm air then surrounds the food inside, and it also heats the baking pan or tray which transfers the heat to the food.

Non-convection toaster ovens can be very small in comparison. They may still fit six or eight slices of toast all at once, but they will be generally smaller in height, as well as less bulky.

When it comes to reheating food, non-convection ovens are very efficient kitchen appliances. They’re more energy-efficient than your regular built-in oven. You can heat croissants, muffins, pizza slices, pastries, even a plate of leftover pasta. All you need is to find the right temperature settings.

Obviously, a non-convection toaster oven is superior to the classic bread toaster – after all, it can do far more than just make toast. But the absence of a convection fan does set some limitations.

Non-convection toaster ovens take longer to reach the desired temperature. They also don’t do much to reduce moisture or eliminate hot spots.

Which Toaster Oven Is for You?

Now, if you don’t have a regular convection oven, buying a convection toaster oven makes far more sense. There are various advanced models which come with preprogrammed cooking functions. They use optimal temperature settings and optimal air circulation for preparing cookies, pizza, bagels, roasts, as well as for slow cooking, air frying, and so on.

It comes down to the level of versatility you need. Most people use toaster ovens to reheat their meals, and they are content with the less complex option. But if you also need yours to cook, definitely go for one with a convection fan.

Almost every countertop toaster oven will have preset functions, with separate temperature and timer knobs. But not all toaster ovens let you customize the factory preset cooking modes. In order to get the most out of your recipes, it’s best to get an oven which gives you more control over the cooking function.

Convection ovens with 2-speed fans are highly popular. The ability to change the volume of air and the rate of circulation can have an amazing impact on your dishes. If you like baking delicate pastries, this is the option for you.

The versatility of this kitchen appliance is tremendous, and it’s especially helpful to people with limited cooking experience. The even cooking you get from convection technology means you don’t have to worry about burning your meals.

Also, it is very convenient to use the preprogrammed settings for popular finger foods and toasted delicacies. Simply place the meal into your toaster oven, choose the right button, and wait until you can serve your meal.

A large convection toaster oven may be a single person or couple needs   to prepare a wide range of dishes.