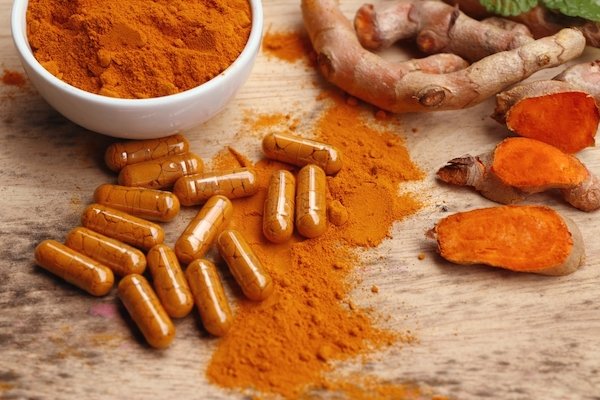 Although turmeric is used in many home kitchens as a culinary spice, there are also purported health benefits. One of these claims is curcumin has been shown to reduce pain and inflammation in patients with arthritis.

Arthritis refers to the inflammation of one or more joints in the body. Rheumatoid arthritis (RA) and osteoarthritis (OA) are two common forms of arthritis.

To determine if curcumin reduces RA and OA pain and inflammation, we reviewed data from a few clinical studies that evaluated using turmeric extracts and curcumin for treating rheumatoid arthritis and osteoarthritis symptoms.

What are turmeric and curcumin?

Turmeric, a member of the ginger family, is native to India and Southeast Asia. It is used in Ayurvedic and traditional Chinese medicine and culinary spice. Curcumin is the primary active ingredient in turmeric. It gives turmeric a yellowish color.

The part of turmeric harvested for use is the underground stem (rhizome). Once the harvested rhizome is processed, it can be used in powder form or dietary supplements.

Turmeric is used in many recipes, most notably Indian and Asian dishes, cosmetics, and fabric dye. Some people make a paste with turmeric powder and other ingredients to help skin conditions. 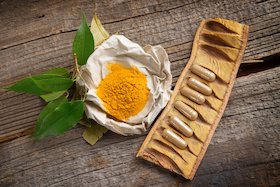 Turmeric spice comes from the root of the Curcuma longa plant and is sold as a powder. Some manufacturers do not disclose the percentage of curcumin (by weight). Others give a minimum value, for example, 3% curcumin. Tayyem et al. analyzed 28 turmeric and curry powders, and the highest curcumin concentration was 3.14% by weight.[1]

Turmeric and curcumin dietary supplements contain a much higher percentage of curcumin. In turmeric extracts, the curcuminoid concentration is often as high as 95%. Most clinical studies use turmeric extract. Turmeric extracts are less likely to be contaminated with heavy metals such as lead than turmeric powders.

If you decide to experiment with curcumin or any supplement medicinally, be sure to consult with your healthcare provider.  Curcumin could change how you metabolize other medicines or affect other health conditions you may have. If you are about to have surgery, be sure to tell your physician a few weeks in advance you are taking curcumin.

There are two types of inflammation: acute and chronic.

Acute inflammation occurs in response to an injury, infection, or stress, such as when you cut yourself. Inflammatory cells are sent by the body to the injured area to start the healing process. The tissue may be red, warm, or swollen, and the inflammation can last from a few days to a few weeks.

So how does curcumin act as an anti-inflammatory? It blocks inflammatory cytokines and certain enzymes, including 5-LOX and cyclooxygenase-2 (COX-2).

What is Rheumatoid Arthritis?

RA is one of many diseases associated with chronic inflammation of the joints. In RA, your immune system attacks healthy body tissue. It does this by mistakenly sending antibodies to the lining of your joints. These antibodies attack the tissue around the joint. The cells that cover your joints become sore and inflamed. When this occurs, chemicals are released that damage bones, cartilage, tendons, and ligaments.

One method of treating arthritis is to use anti-inflammatories and corticosteroids. Since curcumin has been shown to have anti-inflammatory properties, clinical trials have been conducted to determine if curcumin improves symptoms in people with RA. We summarize some of these trials in this article.

Osteoarthritis (OA) occurs when the protective cartilage that cushions the ends of the bones wears out over time.

Medications such as nonsteroidal anti-inflammatory (NSAIDs) are commonly used To relieve OA pain and other symptoms. NSAIDs include aspirin, ibuprofen (Motrin®, Advil®), and Naproxen sodium (Aleve®). Stronger NSAIDs, such as Celebrex and Voltaren, are available by prescription.

Cymbalta is prescribed to treat mood disorders such as anxiety and depression, fibromyalgia, and nerve pain. It was approved in 2010 by the FDA to treat chronic musculoskeletal pain, including osteoarthritis and chronic low back pain.

Curcumin has anti-inflammatory properties, making it a potential treatment for reducing pain and joint inflammation without the gastrointestinal side effects of NSAIDs. Although there is promising research (which we discuss in this article) to support using curcumin to reduce osteoarthritic pain, more research is needed to confirm the results.

How to Increase Curcumin Absorption

The anti-inflammatory effects of curcumin are well documented in reputable scientific journals.

However, one of the problems with taking curcumin is that when taken alone, it has a poor absorption rate and a low bioavailability (the amount of a substance that is absorbed or can be used by the body). There are ways of consuming curcumin to circumvent these issues.

Piperine, an active ingredient in black pepper, has been shown to increase the bioavailability of curcumin.[3] Black pepper can be added to turmeric when cooking.

BioSchwartz manufactures a formula with turmeric extract, standardized to contain 95% curcuminoids and 10 mg BioPerine® for increased absorption. There are no fillers or binders in this product. It is made with non-GMO ingredients and is soy-free and gluten-free.

The label on the bottle states each batch is 3rd party tested for purity and potency. While the product is made in the USA, the ingredients are domestic and imported.

Since curcuminoids attach to fats, curcumin absorption might be improved if you combine it with healthy fats such as coconut or olive oils. Michael Greger M.D. states, “When eaten with fat, curcumin can be directly absorbed into the bloodstream through the lymphatic system thereby in part bypassing the liver.”[4]

Use Supplements that Address Bioavailability

Turmeric/curcumin is more effective when taken in supplement form. If piperine, black pepper extract, or BioPerine® is not included in the formulation, it’s best to choose a curcumin extract that uses a delivery method to improve bioavailability.

The high-quality extracts used in clinical trials such as BCM-95 (Curcugreen®) and Meriva are good options.

BCM-95 Arjuna Natural Extracts Ltd owns the patent to a turmeric formula called BCM-95®(Curcugreen®). It is a 100% pure turmeric extract with enhanced bioavailability.

BCM-95® is a combination of curcumin, turmeric essential oil, and turmerones and is a 95% standardized curcumin-essential oil complex. Arjuna sells BCM-95®, rebranded at Curcugreen® directly to the US market. One curcumin supplement made with BCM-95 is Terry Naturally CuraMed.

Next, we summarize clinical trials in which some participants with either RA or OA took curcumin.

In a study by Chandran and Goal, 45 people with RA were given either curcumin, a nonsteroidal anti-inflammatory drug (diclofenac sodium), or a combination of the two.[5]

After two months, the group given only curcumin showed the most improvement in symptoms and no adverse side effects.

While this is only one small study, this demonstrates the need for large-scale human clinical trials to assess curcumin use in patients with RA and other arthritic conditions.

The participants suffered from either knee osteoarthritis or rheumatoid arthritis (mild to moderate severity) and reported their pain as ≥5 on a scale of 1 to 10.

Their review demonstrated “these [randomized clinical trials] provide scientific evidence that supports the efficacy of turmeric extract (about 1000 mg/day of curcumin) in the treatment of arthritis.”[6]

Due to the studies’ sample size and methodological quality, one cannot recommend curcumin as an arthritis treatment definitively. However, there is enough data to justify curcumin being used along with conventional medication and therapy. The results were promising enough to support larger clinical trials to study curcumin as a therapy for arthritis and other inflammatory conditions.[7]

In a 2020 study, Paultre et al. sought to determine whether turmeric or curcumin extract affected pain and physical function in humans with osteoarthritis (OA) in at least one knee. They also wanted to compare the pain and function in these individuals with turmeric and non-steroidal anti-inflammatory drugs (NSAIDs).

To do this, they searched various databases to retrieve scientific abstracts and papers reporting on randomized controlled trials of humans with OA. The participants were given turmeric, NSAIDs, or neither turmeric nor NSAIDs. Based on strict inclusion criteria, ten studies were included in their analysis.

In a 2014 study, Panahi et al. investigated whether patients with knee OA saw improvement when given curcuminoids. This six-week pilot clinical trial was randomized, double-blind, and placebo-controlled. Nineteen patients were given 1500 mg/day in 3 doses of curcuminoids, while twenty-one took a placebo.

The WOMAC has 24 items, and the participant rates their difficulty on a scale of 0-4 for completing the activity.

The VAS measures pain intensity and is completed by the patient.

The LPPI was developed as an index of severity for osteoarthritis of the knee. The patient completes this questionnaire

Treatment with curcuminoids showed a greater reduction in scores in all questionnaires than placebo. The authors concluded, “.. curcuminoids represent an effective and safe alternative treatment for OA.[9]

Final Thoughts on Curcumin for Rheumatoid and Osteoarthritis

Some studies have shown the anti-inflammatory properties of turmeric. Although more data and more clinical trials are needed to conclude curcumin is an effective treatment for Rheumatoid Arthritis & Osteoarthritis, studies have shown turmeric is generally safe.

Whether curcumin/turmeric extract may be worth trying in conjunction with your current treatment or therapy is worth discussing with your healthcare provider. Your physician can discuss potential side effects, medication interactions and recommend a daily dose of curcumin. When reading the product label of curcumin supplements, confirm there are no fillers added to the formulation.