Skip to content
Home › Juicers › Juicing Info › Can the Curcumin in Turmeric Help with Depression?

You may have noticed turmeric popping up everywhere, from the health food store to the coffee shop. It has been used medicinally throughout India and Asia since ancient times. The health benefits of turmeric have been the subject of many scientific studies. One is whether turmeric can help with depression.

Turmeric is a rhizomatic plant native to India and Southeast Asia and a member of the ginger family. Mature turmeric rhizomes (fleshy underground stems) are harvested and used fresh, dried, or ground as food ingredients, dyes, or coloring agents.

Turmeric has a vivid orange color and is traditionally used to dye the robes of Buddhist monks in India. It gives rice or drinks a golden color, the yellow color in curry, and is often used as an affordable substitute for saffron.

When used with the whole fresh rhizome, turmeric has protein, carbohydrates, fats, minerals, and fiber. The main components of turmeric are curcuminoids and essential oils. The most well-known curcuminoids are curcumin and its analogs.

Depression, also referred to as major depressive order, is a mood disorder that negatively affects how you feel and act and how you think. It can inhibit your ability to perform everyday activities at work and home. There are many symptoms of depression that can range from mild to severe.

It’s widely reported that depression is a result of a chemical imbalance. However, depression is more complex than that. Research suggests many risk factors for depression, including brain chemistry, genetic, personality traits, and environmental factors. It is possible that more than one factor can occur, causing an individual to be depressed.

Many brain chemicals and chemical reactions contribute to your mood, how you perceive events and situations, and how you deal with your circumstances.

Three individuals could have similar symptoms of depression, but one treatment will not work best for all of them. Psychotherapy may relieve the symptoms in one person, while medication works best for another, and the combination of psychotherapy and medication helps the third person. The same could be said about prescription medications. Even though two people have the same symptoms, the same drug may not work for both parties.

The American Psychiatric Association states: “Between 80% and 90% percent of people with depression eventually respond well to treatment. Almost all patients gain some relief from their symptoms.”Treatment could be in the form of medication, counseling from a qualified professional, or both.

Antidepressants are prescription medications that can help relieve symptoms of depression, social anxiety, anxiety, and other conditions.

Many researchers believe antidepressants affect chemicals called neurotransmitters. These chemicals transmit messages from one nerve cell to another in the brain. Examples of neurotransmitters include serotonin, norepinephrine, and dopamine.

Although antidepressants are one way to treat individuals with depression, some people find they help them while others don’t think they work well. Individuals may have to try more than one antidepressant to find one that relieves their symptoms and does not cause side effects. When discussing the use of antidepressants with your healthcare provider, be sure to ask them to detail the pros and cons of using them and of the one they are prescribing.

Is Curcumin Helpful in Treating Depression?

In the past several years, there have been several human clinical trials that sought to determine whether curcumin is helpful in the treatment of major depressive disorder (MDD). Although it cannot be recommended as a treatment for depression, it is reasonable to hypothesize that it could possess antidepressant properties.

The first was a preliminary pilot study conducted by Sanmukhani and colleagues (2014) with  60 participants diagnosed with major depressive disorder (MDD). The 6-week trial was split into three groups that received either fluoxetine (20 mg/day), curcumin (500 mg twice a day), or a combination of the two.

Fluoxetine, approved by the FDA in 1987 (generic version of Prozac), is a prescription antidepressant used to treat people with MDD, anxiety, panic, bulimia, and obsessive-compulsive symptoms. It is known as a selective serotonin reuptake inhibitor (SSRI).

SSRIs are thought to increase the amount of serotonin available in the brain. The benefit of this is the improvement in the transmissions of messages between neurons. Serotonin is a chemical that helps relay messages between nerve cells (neurons).

The Hamilton Depression Rating Scale (HAM-D17), a diagnostic tool with 17 items, assessed depression severity. The items refer to symptoms of depression. A trained evaluator scores the participant’s response for each item and adds the points for a final score.

The assessed response rates and the average change in the HAM-D17 score were evaluated at 2, 4, and 6 weeks. The results show the 6-week administration of curcumin (1,000 mg/day) was as effective as the antidepressant fluoxetine.

Although the combination group showed a better response than fluoxetine and curcumin alone, it was not statistically significant. At the end of six weeks, the mean change in the HAM-D17 score was comparable in all three groups.

This was the first randomized clinical trial that showed curcumin could help treat patients safely and effectively with MDD without adverse side effects.

The second human trial was conducted by Lopresti et al. (2014) also sought to determine whether curcumin was an effective treatment for individuals with major depressive disorder (MDD). This was a randomized, double-blind study of 56 individuals (male and female) with MDD. The participants were treated with either curcumin (500mg twice a day) or a placebo for 8 weeks.

The individuals in both groups showed improvement from the beginning to week 4. However, from weeks 4 to 8, the results showed curcumin was significantly more effective than the placebo in improving several mood-related symptoms. The authors concluded there was partial support for the antidepressant effect of the curcumin extract in people with MDD.

The third human trial, conducted by Lopresti et al. (2016), was a randomized, double-blind, placebo-controlled study with 123 participants (111 completed the 12-week trial). The aim was to determine whether saffron improved the antidepressant effect of curcumin. Saffron, like curcumin, has antidepressant effects.

Two scales were used to measure the outcome: the Inventory of Depressive Symptomatology self-rated version (IDS-SR30) and the Spielberger State-Trait Anxiety Inventory (STAI). The IDS-SR30 contains 30 items measuring depressive symptoms, while The STAI measures anxiety and includes 40 items. The participants complete both questionnaires.

The subjects’ moods were evaluated for differences between baseline (before beginning treatment) and weeks 4, 8, and 12. The data was analyzed in two ways. The first was from all eligible subjects, and the second compared data from participants diagnosed with atypical depression to participants with other types of depression.

Based on the findings of this study, compared to the placebo, the treatments of the two curcumin dosages and the low-dose/saffron combination were effective in reducing depressive and anxiety symptoms in people with major depressive disorder.

This study also confirms the enhanced potency of curcumin in people with atypical depression compared to other depressed counterparts. However, this requires further validation.

The fourth human clinical trial was a 6-week, randomized, double-blind, placebo-controlled study conducted by Yu et al. (2015). This study aimed to determine whether adding curcumin to their currently used antidepressant improved treatment outcomes. There were 108 male adults with MDD.

All participants had been taking the SSRI escitalopram for at least one month and continued to do so during the 6-week trial period. The participants were randomly divided into two groups and given either curcumin (500 mg/twice a day) or placebo soybean powder (both in capsule form).

The HAM-D17 and Montgomery-Asberg Depression Rating Scale were used to measure depressive symptoms. To be included in the study, subjects had to have scores of 10-18 on the HDRS-17 and 14-23 on the MADRS.

One hundred participants (50 in each group) completed the trial. The only adverse event reported by subjects treated with curcumin during the 6-week trial was mild nausea.

The group that took curcumin showed a reduction of scores of the HDRS-17 and MADRS. The findings indicated curcumin supplementation enhanced the antidepressant actions of escitalopram in the participants with major depressive disorder. 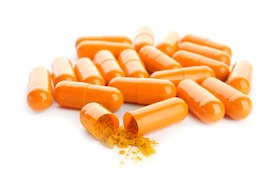 Even though curcumin is the primary compound of the curcuminoids in turmeric, the other curcuminoids are important as they add to the effects of curcumin.

Fresh and powdered turmeric are often used as culinary spices. Tayyem et al. analyzed 28 turmeric and curry powders, and the highest curcumin concentration was 3.14% by weight.

This is probably too low to see any effects, whereas capsules contain substantially higher amounts of curcumin.

Curcumin and turmeric supplements are available in various dosages. The dose of curcumin or curcuminoid complex per capsule is higher in some products than others.

The participants were given 500mg or 1000mg of curcumin extract daily in the clinical trials detailed above. Your healthcare professional can recommend the appropriate dose for you.

One of the issues with consuming curcumin is that it metabolizes rapidly in the liver and intestinal wall. This is problematic because only a small amount of curcumin reaches the bloodstream. It is best to buy a curcumin supplement that uses an ingredient or a process to enhance absorption.

To improve curcumin absorption, manufacturers use piperine, black pepper extract (they usually give the percent of piperine), or BioPerine®.

Piperine is the active ingredient in black pepper (Piper nigrum). BioPerine®, manufactured by Sabinsa Corporation, is a patented extract of black pepper fruit with 95% piperine content and other ingredients. It allows for increased absorption (movement into the bloodstream) and bioavailability (the amount absorbed) of the nutrients, including curcumin.

Capsules, such as the Sports Research Turmeric Curcumin C3 Complex, are made with BioPerine® and formulated with coconut oil.

Another is to use phytosome technology. This process binds each curcumin molecule with one or more molecules of the nutrient phosphatidylcholine. This makes molecular complexes called phytosomes which enhance curcumin absorption. One example is Thorne Research - Meriva 500-SF (Soy Free) - Curcumin Phytosome Supplement.

Factors to consider when buying a curcumin supplement

Some curcumin and turmeric supplements contain generic curcumin, while others have

Should curcumin be taken with food?

Yes, curcumin should be taken with a meal for two reasons.

First, since turmeric is fat-soluble (dissolves in fat), its absorption is much better when taken with fat. When the turmeric binds to the fat, your body absorbs it more slowly, so more curcumin goes into your bloodstream. Healthy fats such as oils (coconut oil, for example), avocado, nuts, and seeds are great choices. If you use turmeric in a recipe, include black pepper and healthy fat.

Final Thoughts on Turmeric for Depression

There is promising research into using curcumin as an effective treatment for individuals with major depressive disorder.

Be sure to talk with your healthcare provider before taking turmeric or any supplement since it could interact with other medications you are taking or affect other health conditions you may have. While some people have found turmeric helpful for various health conditions, it should not substitute for prescription drugs.

The Food and Drug Administration (FDA) confirmed that curcumin is a compound generally recognized as safe. However, if you experience side effects, be sure to stop taking the supplement immediately.

Turmeric root is best juiced with a masticating slow juicer. We have an Omega NC900HDC Juicer and are very pleased with it.